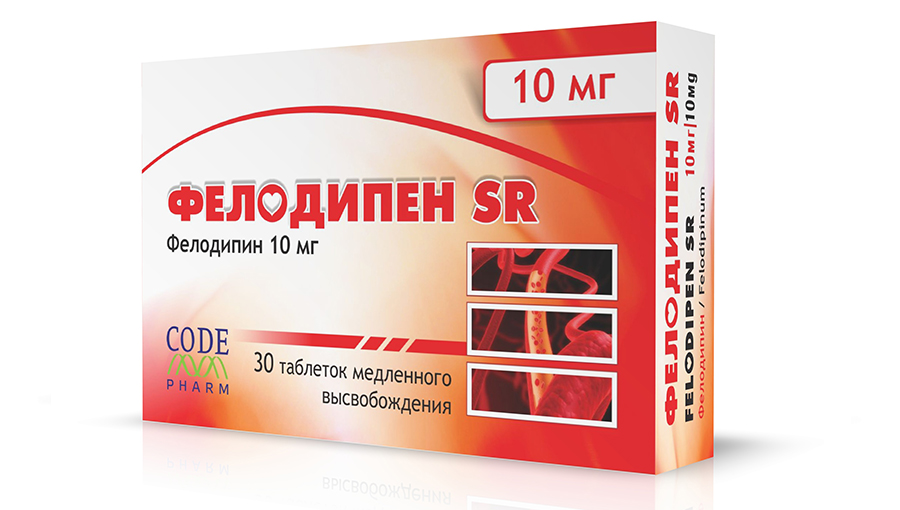 Dosage forms: Coated tablets, with a sustained release of 5 mg and 10 mg in blisters.

Pharmacological properties: The drug belongs to the calcium channel blockers of the dihydropyridine group. It has antihypertensive and antianginal effects. It lowers blood pressure by reducing peripheral vascular resistance. It has a dose-dependent anti-ischemic effect. It reduces the magnitude of myocardial infarction; protects against reperfusion complications. Generally, it does not have negative inotropic effects, and has minimal effect on the cardiac conduction system.

Pharmacokinetics in special patient groups: In elderly patients, and in cases of liver function abnormalities, plasma concentration of felodipine is higher than that in younger patients. Pharmacokinetic indicators of felodipine remain unchanged in patients with impaired renal function, including those receiving hemodialysis. About 70% of the dose taken is excreted with urine, and the remainder with faeces in the form of metabolites. An unaltered form is eliminated in quantities inferior to 0.5% of the dose with urine. Felodipine penetrates the blood-brain barrier, enters the placenta and is excreted with breast milk.

Dosage and method of administration: The drug shall be taken in the morning, before breakfast or after a light breakfast. Do not chew, crush or divide film-coated tablets.

Arterial hypertension. Adults (including the elderly): Dosage is always determined individually. Therapy begins with a dose of 5 mg, once a day. If necessary, the dosage may be increased; usually, the maintenance dose is 5-10 mg once, daily. To determine the individual dose, it is advisable to use tablets containing 2.5 mg of Felodipine. For the elderly patients or patients with impaired renal function, the recommended starting dose is 2.5 mg once a day.

Stable angina. Adults: The dosage is always determined individually. Treatment begins with a dose of 5 mg once a day, if necessary, the dose can be increased to 10 mg once a day. The maximum daily dose is 20 mg once a day.

The drug may be used in combination with beta-blockers, angiotensin-converting enzyme (ACE) inhibitors or diuretics. Complex therapy usually increases the hypotensive effect of the drug. Therefore, it is necessary to be aware of the increased risk of arterial hypotension. Therapeutic dose should be reduced in patients with severely impaired liver function. In patients with impaired renal function, the pharmacokinetics of the drug is not significantly changed.

Side effects: As in the usage of other calcium channel blockers, the drug can cause facial flushing, headaches, palpitations, dizziness and fatigue. These reactions are reversible and often occur during early treatment or when the dose is increased. Also, depending on the dose, a peripheral edema may occur, which may result in precapillary vasodilation. In patients with gingival inflammation or periodontitis, a light swelling of the gums may occur. This can be prevented by careful observance of oral hygiene. And in some cases: skin: rarely – urticaria and itching. In isolated cases, photosensitivity reactions; musculo-skeletal system: in isolated cases, arthralgia and myalgia; central and peripheral nervous system: headache, dizziness. In rare cases, paresthesia; gastrointestinal tract: rarely – nausea, gingival hyperplasia; liver: in rare cases elevated liver enzymes; cardiovascular system: rarely – tachycardia, palpitation, peripheral edema; other: rarely – fatigue, in isolated cases – hypersensitivity reactions such as angioedema.

— Hypersensitivity to Felodipine or other dihydropyridines;

The high rate of felodipine bonding with proteins does not affect free fraction bonding with other drugs (eg, warfarin). Do not use the drug with a grapefruit juice due to the flavonoids that it contains, that enhances bio-availability of felodipine. Beta adrenoblockers, verapamil. tricyclic antidepressants and diuretics enhance the hypotensive effect of felodipine.

Special instructions: In rare cases, the drug as well as other vasodilators, can cause acute arterial hypotension – which, in a number of sensitive patients, can lead to myocardial ischemia. Currently there is no data on the appropriateness of the usage of the drug as a secondary prevention of myocardial infarction.
It is effective and well-tolerated by patients, regardless of gender and age, as well as patients with concomitant diseases such as asthma and other lung diseases; impairment of renal function; diabetes; gout; hyperlipidemia; Raynaud’s syndrome, and after lung transplantation.

Has no effect on the blood concentration of glucose and lipid pattern.
Patients, who during Felodipine treatment, experience weakness and dizziness, should stop driving vehicles or performing tasks that require attention and concentration.

Keep out of the reach of children and do not use it after the expiry date.

Overdose: Symptoms: possible severe arterial hypotension and bradycardia. Treatment: symptomatic therapy. When experiencing severe arterial hypotension, the patient should be laid in a horizontal position, with their legs up. In case of bradycardia, a dose of 0.5 mg -1 atropine is prescribed by intravenous administration. If this is insufficient, it is necessary to increase the volume of plasma levels by infusion of glucose solution, sodium chloride or dextran. Symptomatic drugs with predominant effect on the alpha-adrenergic receptors are prescribed in the event that the above measures prove ineffective.

This site uses Akismet to reduce spam. Learn how your comment data is processed.